Women Who Run With Wolves

It's been so interesting working with these inspiring women on this show... about women.

I've learnt a lot. And it makes me want more. There is so much to explore, around themes of feminity, the Pack vs. the individual, the things we do for each other and the things we defend for ourselves, strength and fragility, the tame and the wild, and that oh-so-precious and oh-so-powerful thing: balance.

I was thrilled to discover during the process that central to all this is also a theme I've been circling around in my own work for a couple of years now: ritual. Of course the Cyr Wheel (the acrobatic discipline that forms the spine of the company, Alula Cyr) is a perfect piece of equipment on which to explore these themes - the circles and cycles, around again, round again... what changes and what stays the same.

Witnessing the fierce will, the thrilling power and the stupid humanity of these three performers, not to mention their insane dynamic skill, is pretty exhilerating. A female audience member commented that she found the whole thing very spiritual and very moving... and a male audience member (who is, disclaimer, a friend) said it made him want to be a woman. Haha! Not bad.

The show's title, Hyena, is inspired by the fascinating matriarchal social structure of the much maligned spotted hyena. And the title for this blog post comes from the book of the same name by Clarissa Pinkola Estes, which the cast have used as a unifying central text for much of the creative process.

Thank you to Jacksons Lane, The Roundhouse, Arts Council England and Alula Cyr themselves for all the support. The show will continue touring and no doubt developing. It certainly feels like something that could grow and morph over the years as the performers themselves change. Perhaps every 20/30 years they could re-develop and explore the cycles of woman over time...

Keep an eye on the company's website for future performance dates:

Now You Can Blog from Everywhere! 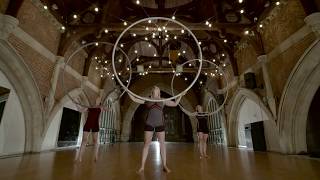 Women Who Run With Wolves

The Body As A Creative Tool